Apparently Mossberg has been busy.

I haven't paid hardly any attention to Mossberg in...a long time.  By complete accident today, I encountered a couple of items that seem quite interesting.

I never realized they had an entry in the "scout rifle" space, but lookee here: 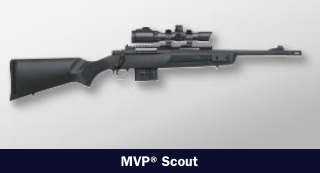 Oh, I can immediately see problems.  It doesn't make weight.  The glass on the "with-glass" model seems to offer most of the problems of a conventional eye relief without delivering the value of a true intermediate eye relief.  The rail with integrated ghost-ring sight is indeed nice, but it ruins access to the loading/ejection port without offering anything of real value.  The bolt design appears to be push-feed, plunger-eject, and sliding-plate-extract--exactly what the Scout Conferences codified as the configuration of last choice*.  The LOP is too long, with no apparent means of adjustment.  And there is no stud for a Ching Sling.

But at least someone is trying, and there are a couple of nice features here.  The ability to use both AR10 and M14 magazines?  Yeah, that seems like a goodness thing--provided it turns out to be suitably rugged and reliable.  The trigger may be nice as well, but I've got no sense of field feedback on it yet.

All in all, from the look of it, this might yet be a decent platform for the concept.  It should be reasonably trivial to shorten the LOP and round the buttpad, cut out the rail space obstructing the objection port (or replace with a more suitable alternative), and add a middle stud for a Ching Sling.  Acquire a Leupold M8 2.5x Scout Scope and mount it as low as possible with QD rings, add the Ching Sling itself, and include some magazines, and--again, provided it runs--this might be a very nice little rifle.  It would have the magazine advantage over the Ruger, but require a bit more fiddling to get it close enough to spec to get the complete system synergy--and the Ruger's bolt is closer to the Scout Conference spec.  Hey, if nothing else, choice is good, and I'm happy to see it!

This struck me as a cross between "very encouraging" and "total facepalm".  On the "encouraging" side, I love the adjustable LOP idea, and a tang safety on a levergun is the right way to include what is arguably a not-strictly-necessary feature in the first place.  The front sight base seems reasonably sturdy, and the rear receiver ring should both permit a compact ghost-ring sight, and clear access to the ejection port.  Very nice.  I've got no idea how it runs or how the trigger is, but presumably any kinks could be worked out with some comparatively light gunsmithing.

Then I noticed the fore-end rail space.

Seriously, Mossberg?  You put rails on all sides except the top?  Okay, look, I admit I don't really speak tactard in the first place, but I think most of us would look for a top rail first, and then maybe--maybe--a bottom.  One of the principal attractions of the levergun in the first place is its luxurious flatness, and side rails would seem to be inherently counterproductive to that end.

Look, it's a levergun, not a plumbing main.  The more stuff you hang off those rails, the further away you get from what attracted you to the design in the first place.

Despite that irritation, though--a single rail on top would have permitted scout scope or dot sight options and still allowed a svelte fore-end--I like the idea of this piece, and hope I get to meet one some day.  May it sell well enough that Mossberg offers it in other calibers too--I'd love to see .45 Colt or .44 Mag, and even .357 is a worthy option for an iron-sight carbine.

I'll have to look into this one some more, but I like the concept of the single-shot adapter/plug, plus the ability to take 10-round magazines as well.  Gives the kid something to grow into.  I've no idea about trigger or accuracy, but the safety seems well-located, the receiver sports a dovetail that should permit a good ghost-ring rear sight, it's light enough and looks amenable to some light gunsmithing should that prove necessary.  The fore-end looks a little short for a proper shooting sling, but I'd have to see it in a kid's hands to know if it was too short.  The LOP is just about right for adults (12.25") but should be shorter for kids;  since it's wood, this should not prove to be a daunting problem.

Again, I'd love to meet one and see how it feels in the hands.

So, cool!  Mossberg has been busy.  Will have to cogitate, investigate, and see what if anything comes of it.  :-)

_____________________
* Once again, full disclosure is that even the Steyr Scout is not controlled-feed, nor inertial-eject.  The Scout Conferences were clear enough in their preference for controlled-feed, inertial-eject, full-claw-extract...but Cooper must not have thought it a deal-breaker for the production Scout, as I'm not sure he ever even mentioned the Steyr SBS's use of plunger-eject and Sako-style mini-claw extractor.  The Steyr also has restricted access to its ejection port, and (just barely) doesn't "make weight" either.  Clearly, this arrangement can run just fine despite being "out-of-spec", and I always try to apply a few grains of salt when evaluating another take on the concept.  :-)
Posted by Kevin Wilmeth at 6:19 PM

I love to see attempts to duplicate, even challenge the design of old reliable products, by new companies and old ones. It is astonishing how often they do very badly at it. :) I've got the old classics myself, of rimfire, carbine and lever action as well as an old mossy shotgun. I'll be sticking to them, and happy to read about experiences others have with the contenders. :)

Mama, as always I appreciate your thoughts. My response here turned into a post of its own. :-)