Please, stop. I need taller boots for this.

So by complete accident, I recently failed to avoid noticing this: 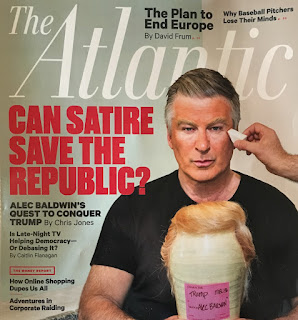 I try, you see, but sometimes it's just inevitable.

Sometimes I'm tempted to wonder if it is even theoretically possible for this crowd to be more sanctimoniously self-absorbed and haughtily tone-deaf than they already are.  But the very minute I consider even entertaining the thought, the Weaponize Arrogance Now! crowd comes through once again, like the finely honed machine that it is.

"Can Satire Save the Republic?"  Oh, you mean from the hive mind's metastasizing singularity of abdicated intelligence masquerading as wit and self-arrogated moral superiority over an undifferentiated mass of people they utterly and totally refuse to understand on any level beyond that of a toddler at meltdown?  Well, you know, as an art form, actual satire just might be able to accomplish that--if, you know, it were done well, and pointed at the right target.

And so here they are, this professionally smarter-than-thou crowd, as usual presuming that they've got it all figured out.  Just a little more ridicule and those stupid hicks and cousin-humping rednecks will surely see the light.  It's so self-evidently obvious!  And then we'll be able to avoid all this electoral ugliness next time.

I know I shouldn't let it get to me, but JFC, so many of these people are committed to their onanistic displays of wanton superiority and intrasquad virtue-signaling.  It's bad enough that we've been burdened with the Deep State in the first place, and then with this latest buffoon to figurehead it, without having also to deal with this worse buffoonery of the overeducated useful idiot whose understanding of utopian ideology and elevated sense of self-importance vastly outpaces his understanding of real people in meatspace.

Hell, they don't even understand that the Current Occupant is an intentional buffoon, and yet from what I can tell, they crow with stunningly pathetic pride at all their oh-so-very-clever takedowns of what may be the ultimate straw man.


And man, is it annoying when I then sound (to myself at least) like I'm somehow defending that smarmy buffoon, or his "supporters", or even "the Republic" itself.  I'm not, of course.  But this hive-mind gambit--to somehow manage to be worse than all that, with new levels of sanctimonious smuggery backed up by childishly facile tone-deafness in practice--is, at least arguably, working.