The quantity of what color is the sky in your world? is very, very large here.  I had to read through it a few times to make sure it wasn't an Onion article, but no, near as I can tell, the author actually means it.

The article's title is "If You Send Your Kid to Private School, You Are a Bad Person:  A Manifesto".  (I know:  an obvious Onion headline, right?  You understand my confusion!)  Its point is laid pretty bare here:

I am not an education policy wonk: I’m just judgmental. But it seems to me that if every single parent sent every single child to public school, public schools would improve. This would not happen immediately. It could take generations. Your children and grandchildren might get mediocre educations in the meantime, but it will be worth it, for the eventual common good. (Yes, rich people might cluster. But rich people will always find a way to game the system: That shouldn’t be an argument against an all-in approach to public education any more than it is a case against single-payer health care.)


Only a hard-core statist can have such supreme confidence in the hive mind, to state an absolute truth ("But rich people will always find a way to game the system"*) and then, without even so much as a single word of physical separation, utterly ignore it as though it did not exist ("That shouldn't be an argument against an all-in approach to public education...").  See:  she said it, you believe it, that settles it.  What are you, a cancer to the hive mind or something?**

I think I may have to propose a new, simplified definition of statist as one who does not merely fail to recognize irony, but actively refuses to believe that it exists.

Oh, but it gets better.  Check out my submission for "top zinger" among a truly bumper crop of The Stupid (emphasis mine):

And parents have a lot of power. In many underresourced schools, it’s the aggressive PTAs that raise the money for enrichment programs and willful parents who get in the administration’s face when a teacher is falling down on the job. Everyone, all in. (By the way:  Banning private schools isn’t the answer. We need a moral adjustment, not a legislative one.)

Posted by Kevin Wilmeth at 12:43 AM No comments:

Okay, I admit, I actually find this interesting.

The compact model in particular just might be the premier choice for a rimfire rifle.  A serviceably short length of pull (12.5"), usable front sight mount, promising trigger, ergonomic safety and magazine release, the uber-dependable and ubiquitous rotary 10/22 magazine, and very reasonable price point are a nice combination of features.  If that receiver scope dovetail can permit a ghost-ring rear sight in back and a cantilever Scout scope base up front, one could add those plus a third stud for a Ching Sling, a replacement front sight post, and have a fairly feature-complete .22 Scout rifle.

Maybe someone at Ruger is listening again.  Just recently I met my first SR9, and wasn't prepared for how much good there was in there.  It ain't perfect by a longshot, but it's a good deal further along the continuum than anything in the P-series ever was--good enough that if it runs well in hard use, it's arguably a viable competitor to the XD and M&P, which is saying something.  Certainly the most compelling original centerfire auto pistol that Ruger has yet offered.  And it wasn't too long ago that I ran into Ruger's Gunsite Scout Rifle, which impressed me greatly.  And now this.

Please, fellas:  do keep this up.

'The Loudener'. Because Race Gun.

Sure, it's perfectly ridiculous.  Still, this guy makes me giggle.  Behold "The Loudener", muzzle-blast (yes, you're reading this right) enhancer:

The money line comes at about 2:20 in the video, when he says "...you have this‘rain of hate’ coming out of the end of your gun...”, and the following disclaimer shows up at the bottom of the screen: 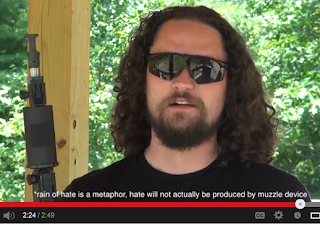 
Didja lose coffee over that?  I very nearly did.

America's UberGovernment.  And the rest of us.

But that goes only so far. Keep that up for a few years and one day you’ve got no friends left at all. And then you’re surrounded. By us. And by millions more who never thought they’d be at such a point in all their lifetimes.

But remember: you started it. We didn’t. We wouldn’t. We’re better than that. But once you’ve weakened yourself with your own voracious secret keeping, your gluttony for data, your excesses in the cause of Control — we will damn well finish you.


I understand the angst.  Hopefully enough people will "get it" in time that we can simply walk away from the dickheads...but I know that may not be the way to bet.  Some people are...committed to their fantasies.

For them, Claire.  And Vanderboegh.  And Larken: