Another capital-R resource from Claire.  This one covers--well--the idea that sometimes the path to better things does indeed go through the technically unacceptable.

Are we likely to see constitutional carry in Massachusetts, New York, or California any time soon? Ha! But I can tell you that a lot of us who were around in the dark old days of 1993 and 1994 never thought we’d see even this much, ever, in so many places.


I do indeed remember those darker days;  in fact it was right around then that I stumbled across Claire in the first place.  Worth, seriously worth, a RTWT.

The only downside I can see, honestly, is that celebrating a good thing for what it is, isn't going to help the sort of prag mindset that still can't distinguish between long-term strategy and true pre-emptive surrender.  Yes, there is a lesson in all this for those of us who can't bring ourselves to actively support ideas that might turn out later to be valuable incremental milestones.   (Duly noted and appreciated, and to borrow from Joel, the crow tastes pretty fine!)  But we, too, should recognize our important place in restraining the surrender impulse--and keep at it.  The real visionaries, as Claire's post suggests, will recognize us for what we are and work with us.

Here's to more such free-people assertions.  Many more!

...or has it gotten way past the eye-rolling stage, even by the usual election standards, the way many people are acting at the very idea of a Trump presidency?

You know, as if he would somehow be materially different from any other "leader" in the same position?

Wait...you mean he might be a bigot against The Little People?

He might curtail basic human rights at home, and ignore them abroad?

He might do all the above by lying, deceiving, and conspiring with not-nice people to get what he wants, all at our expense?

You mean, in general, that he just might act with the impunity of a dictator, rather than with the accountability of an executive custodian?

ZOMG, your powers of perception are simply off the charts, man.  With informed, enlightened attitudes like that, you have me, like totally convinced that we can totally prevent even the slightest bit of all that by simply electing someone else.  Hill!  Bernie!  Cruz!  Rubio!  Kang!

Ferchrissakes, people:  yes, Trump is frightfully unfit to win The One Ring Sweepstakes.  But all this "leave the country!" "the sky is falling!" melodrama really does little more than out you as either a weapons-grade hypocrite, or as unconscionably, nearly unbelievably naive.  They're all unfit to wield power...over a cat, much less 330+ million people.  And they all have been since before any of us were born.

On the other hand, maybe you should leave, if you can't (or refuse to) see that the the real problem with The One Ring Sweepstakes isn't the competitors, but the prize.  If the office disposes of so much power that just putting a slightly-less-sophisticated buffoon in it can cause the whole thing to come apart, then maybe--just maybe--the office has too much damn power.

Saw this from the redoubtable David Codrea today:

I vote for good when I engage in a mutually voluntary and acceptable association or transaction. When I vote for a political candidate, I'm picking up any chair in a bar fight I did not start, with the sole intent of extricating me and mine for the time being with minimal injuries.


Not sure I've ever seen it stated more honestly than that.  Even as someone who happens to be committed to the other decision that can arise out of that observation (I simply reject the fait accompli argument for the permanence of the state), I'm in full agreement with the observation itself.

Yet another example of why David is one of the most important "gun writers" we've ever had.
Posted by Kevin Wilmeth at 11:53 AM No comments:

Seen today on the TwitFace: 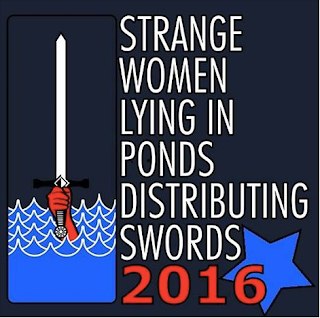 For the disaffected who yet still use the fait accompli argument to justify their participation, it would seem to be by far the least ridiculous choice available.

(For anyone who doesn't get the reference, it's from this.)

Posted by Kevin Wilmeth at 10:26 PM No comments: