This is the TwitFace in toto.

I suppose one could try to make the point better than this, but why?  It's all there. 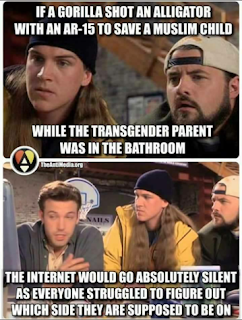 And what a blissful silence it would be.

Just putting this benchmark out there. Eyes, ears.

All of a sudden, the TwitFace is starting to ramp up a noticeable number of those hive-sourced, meme-driven, professionally hoplophobic nuggets of just exactly the sort that seem to happen right before something big and stupid goes down somewhere in the American soyuz, becoming suspiciously convenient fodder for just whatever the victim-disarmament crowd has recently been working on pimping.  You know, that shit that always seems so uncanny when it happens, and never seems to happen at any other time?

Of course, maybe it's nothing:  these tiresome people are always digging away at human independence;  they are nothing if not committed to their war on everyone.

Still.  The level of tone-deaf stoopid right now is beyond breathtaking, and we know for a damn fact that recent administrations are not above working "under the radar" to manufacture whatever opinion that the peasant rabble refuse to accept on their own.

(As seen on the TwitFace.)

I’m sure you were great on TV and all (I confess I have never been a proper Trekkie), and I’ve no reason to doubt that you have also been a personal inspiration to more than a few perfectly decent people trapped in the closet by shameful and needless sexual bigotry. Even more importantly, you have done much to shine needed light on one of American history’s darkest moments, in openly talking about your own family’s internment in WWII. (As things happened for me, I learned about that horrible exercise in genocide enablement from others, but I will always respect you specifically for swimming against the shameful tide to willfully ignore or forget it.)

But seriously, George, your snowflake comment here pretty much writes its own rejoinders.

Since you brought it up, then, here’s a few other “the thing”s about snowflakes:
Look, I understand that your intention in coming to the defense of the noble snowflake, was probably to call out the notion of unintended consequences. In itself, that is a reasonably noble instinct, which I would generally applaud. But—aside from a rather juvenile delivery—do you really not recognize the fractal irony in defending the accretion of mindless, non-adaptable, easily manufacturable participants in a societal contest over “legitimate” power?

And I not only mean the overall irony, George, I mean the personal irony. It somehow seems very odd that you would make a reference such as “in large numbers become an unstoppable avalanche that will bury you”, given your own personal and family histories. I would think that you would understand, implicitly, “the thing” about “in large numbers” as it relates to human society, which is this: the relationship between empathy and “large numbers” is strongly inverse. Are you really suggesting that the only thing that matters in a societal discussion is “large numbers”? That the little guy should just suck it up lest he be bur[ied] in an avalanche? Really?

The late Aaron Zelman had a name for that sort of cognitive disconnect: bagel brain.