Arthur Silber on the Dorner exercise.

I make pretty regular references to Arthur Silber, and there is good reason for that.  The man is a magnificent commentator, and one doggedly obsessed with things that matter.  (As opposed to Things That Matter(TM), see?)

A few days ago I saw this piece, which is a rather classic Silber device, regarding--um, Christopher Dorner, yeah...

Everyone on talk radio in Los Angeles goes on and on about just a single topic these days. I'm sure the same is true in much of the rest of the country. It's a huge national story.

A man has murdered several people, and he's threatened to murder many more. He says he has his reasons, and he thinks they're good reasons. He thoughtfully published his reasons so all of us can consider them. But when you read what he's said about why he's killing people, you realize it doesn't make any sense. He uses words that are familiar to us, but he uses them to mean whatever he wants them to mean.

I'm confident they'll catch him soon. After all, we've seen him on television a lot. Someone is sure to get a glimpse of him any day now. He can't hide forever, can he?

It will be fine. I think we should all calm down. Obama will be locked up very soon.

But as to Dorner...  So last night the claims of vic'try! started to roll in, with all the usual trappings:  conflicting details (does anyone doubt that these will officially settle into meme-supported patterns?), ignored eyewitness accounts, and of course the obligatory overlooking of whatever combat tactics our noble protectors decide(d) to use "onsite".

See, the cabin seems to have burned to the ground.  (It certainly appears that the cops wanted it that way.)  And there may, or may not, have been a body in it.   Gosh, we're just going to have to take the investigators' word for it on the final details of what went down.

Silber today says "Welcome to Afghanistan.  This is just the beginning.":

I'm like really stupid, so these really stupid questions occur to me. There was absolutely no way to take this suspect alive eventually? They couldn't wait him out? I guess maybe they had other important stuff to do -- the kid's high school play, a book club meeting, maybe a department barbecue (har dee har har). And since they're not absolutely sure it's Dorner who was burned alive ... well, um, does that mean maybe they burned someone else alive? Did they determine that no one else was in the cabin? Does anyone care?


Just the heretics, from the look of it.  The cops' problem is nearly already "fixed";  with a body, a unified story and a cordoned-off pile of ashes for evidence, who are the little people to say differently?)

Silber goes through the nearly comical over-reaction of the Dorner manhunt (which Joel brilliantly summarized as "Mildly concerned police officers basically shooting everybody they see, on theory that it might turn out to be Dorner"), and returns to his larger point:

Like I said, I'm totally stupid, but I think the lesson goes something like this: If you threaten the State itself or interfere with its plans, and especially if you threaten one of the State's armed, militarized branches, the State will go to war, including here at home. I don't mean "go to war" metaphorically. I mean the State will go to war. So I think we know what the response will be if/when there is widespread domestic unrest, when the economy further falls apart, for example. Entire neighborhoods cordoned off, whole blocks incinerated, checkpoints everywhere, people shot for any reason, or for no reason. Oh, yeah: no more fourth amendment for you, either. Well, it's not like you were doing anything with it. If you haven't done anything wrong, you don't have anything to hide, etc., etc., etc. And just to be safe, you don't want to be there. Yeah, where you are right now. Don't be there. And don't move. Haha. Gotcha!

Just as the fish rots from the head, the horrors start with the president. Why should Obama be the only one to have a Murder Program? It's only right that every police department should have its own Murder Program. Especially in war time.


The "don't be ridiculous" crowd may need to be reminded at that point, that it wasn't so long ago that we used to make fun of those stupid Russkies because they couldn't travel freely about their own country without showing their papers.  Or those stupid 1930s Germans, because they couldn't see the Nazis metastasizing from "legitimate government" into murderous evil, until it was too late.

Some days it's easy to remember that a determined minority can usually outsmart and fend off an institutionalized majority--lots of people have observed that the Dorner case illustrates well that one man can tie up the resources of an entire state for nearly a week.  (And if that pile of ashes is Dorner, he doesn't seem to have been all that competent a baddie in the first place.)

Other days, though, when you get a glimpse of what's coming, of what "we" have made all but inevitable...well, it's a reminder of what the cost of such a "victory" might look like.

To commemorate the occasion of the State of the Union lecture...

...it seems only fitting to share this Larken Rose classic.


Back to work now, people!  Your country needs you...or something.
Posted by Kevin Wilmeth at 7:45 PM No comments:

Hat tip to Claire.  This is quite interesting.  Former NSA "senior executive" turns whistleblower;  is prosecuted for it;  interviews with Abby Martin at Russia Today.  Here's Thomas Drake:

He's an interesting witness, and for some people this might be quite powerful.  You have to put aside some of the tooth-gnashing statements he does make (including another installment of the aggravating "giving" rights fiction);  keep in mind that he did after all, at some point, agree to be employed by the NSA--so we probably shouldn't expect Rothbardian libertarianism to spew forth.  And at any rate there is still a whole lot in here that Master would really rather you not hear, regardless--so it's certainly useful.

It's good to see that RT is still unafraid of performing actual journalism, since the US industry any more seems to be interested only in "legitimate media" urinealism.  (Take a moment to savor the deep irony of that.)

Let's hope that Mr. Drake doesn't find one of these in his pocket tomorrow morning.
Posted by Kevin Wilmeth at 6:10 PM No comments:

I first got wind of this via Wendy McElroy...but Joel had it in color.  :-)

It needs no explanation. 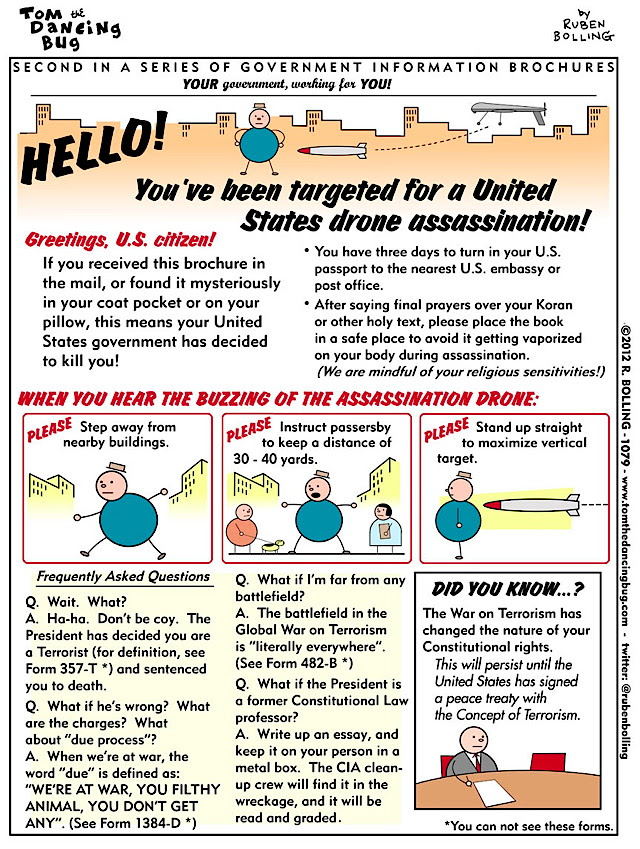 The original artist appears to be here.  By all means show some click-love.
Posted by Kevin Wilmeth at 5:43 PM No comments:

Gad, I love this.


From the comments (I know, YouTube comments and all, but still, this was right there...):

Seriously, how can you not love these guys?


It actually makes me want to dig ARs (and AKs, for that matter) more than I do.  Sorta like I just want to have a reason to patronize Ronnie Barrett.

Keep going, fellas.  Every day it gets better, and people are watching.

Posted by Kevin Wilmeth at 11:19 PM No comments: