I was checking up on one of David Codrea's Examiner articles, of the "call-out-Master's-intrasquad-shenanigans" variety that he has become so deliciously good at over the last few years.  I confess, I love these articles, even though I think their primary value isn't in "improving" the system so much as simply showing people in lurid detail how hopelessly broken it is.  (Who knows, maybe that's David's point too.)  At any rate, it's always fun to laugh at the pernicious piddlewits when they can't even navigate their own morass without fudging everything.  A cheap thrill, perhaps, but nonetheless real.

This particular article was about asking the perfectly reasonable question of just how this new fancy-pants Armatix pistol managed to get OK'd by the Bureau of Thou Shalt over in Respublika Kalifornia...without the microstamping requirement.  Huh.  Surely they didn't resort to...shenanigans in order to make it happen all legal-like...naw!

Anyway, in that article David thoughtfully links to the URL for the pistol's "features" (which don't include microstamping), and I figured I'd take a look.  So I did.

Oh, it's not like I was expecting anything legitimate, or anything crazy like that.  Far from it.  But among the list of "features" (that nobody who actually trusts his life to a pistol would ever accept), this one actually stuck out at me:

an operating distance of up to 10 inches


Wait, am I getting this right?  The whole system is based on simple proximity to an RFID watch?  And here I thought the whole point behind this "smart gun" thing was to make the piece proprietary to the user...

But maybe I shouldn't lose faith.  After all, changing course in midstream is something this crowd is certainly known to do--and they do have to make sure that after they mandate this technology for everyone, that the next outrage becomes possible, timely, and above all enabling for the next round of Hobble Us All Some More, Please, Really We Like It.

Maybe they're not content to stop at regular people getting killed due to dead-battery failures, electrical malfunctions, or interference hacks, whether by freelance cretins or (far more likely) the enforcement apparatus (sporting weapons with no such limitations in them) which simply decides to shut everything off at a really bad time for the "legitimate" "owner".*

Nah, the next "loophole" will need to be something more...gruesome.  Hey, how about going back to the "murdered with your own gun" trope?  Let's say all batteries and electronics are working, and the po-po are too busy ventilating pets two doors down from the bogus address their paid CI gave them.  Home invaders with edged weapons swarm in and overwhelm the homeowner, who manages to get one of the attackers (with 6-7 rounds of .22) before being konked from behind by another.  Seriously irritated by the loss of one of their own, the unconscious homeowner's execution is simple:  place his watch-bearing hand over his eyes, and shoot him through it.

Bingo!  The final proof that gun owners will just shoot their eye out if they try to use the piece defensively, even with a state-of-the-art "smart gun".  That's it, we'll just have to get rid of them once and for all.  (The guns, I mean.  Of course it's the guns.)

Oh sure, laugh.  Laugh like you did lo those many years ago, when you first heard that those stupid Russkies and Germans had to--get this--show government tracking papers just to travel within their own borders.  And lived in constant fear of being spied on by their own government...and....

Quote of the day.

What would we do without William Norman Grigg?  The man is quite simply a treasure.

Only in a universe in which the rules of logic follow the contours of a Salvador Dali painting would that warrant be considered “reasonable,” if the objective had been to avoid unnecessary violence.


I have a love of language and the construction of a good mental image, and Grigg regularly qualifies for wizard status in this regard.  When I need to point someone to an example of how to describe the world as it is, rather than as viewed through the beer goggles that so much of society insists on wearing, I go to him.  He combines razor-edged ridicule and sarcasm with a straight-up delivery style (it'd be deadpan if it weren't quite so sizzling with scorn) that reminds me of what we were all taught a "reporter" (remember those?) is supposed to be like.

That is:  it's a regular story, only told straight, without all the bullshit, and with terms and comparisons that are, like, contextually accurate.  (And it's hard to describe how refreshing that is, to someone who doesn't already understand.)

The world is not just more tolerable with him in it.  It's better.
Posted by Kevin Wilmeth at 8:03 AM 1 comment:

Oh, it's nothing institutionally flattering, what, do you think I've gone crazy or something?  :-) 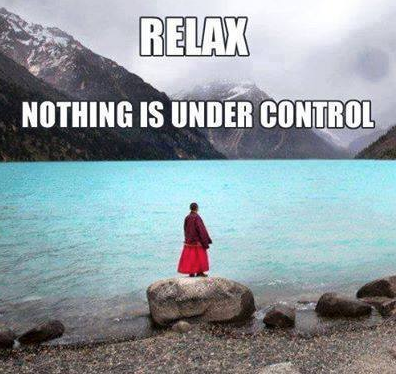 It's just that were it not for Facebook I might not have seen this.  So I'll give credit where credit is due.  (It happens so infrequently these days, that it's actually kinda fun sometimes, being the target market and all.)

I love it.  It's not just (gasp!) anarchy--hell, that gives nearly everyone the vapors already--but the word that even scares many tentative anarchists:  chaos.  You know, the singular operating principle of the entire freaking universe.  Well, except for us, who--work with me here--"know better".

"Nothing is under control"?  Eeeek!  What will we dooooo?