So I got wind of another school shooting on Facebook, yesterday: 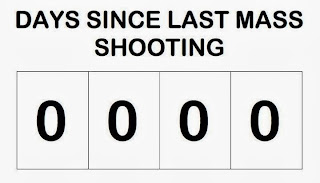 The "annotation" provided with the picture makes the intent perfectly clear, in case there was any doubt:

Wow, man.  That's, like, witty.  But you know, with just a small change it might at least be useful: 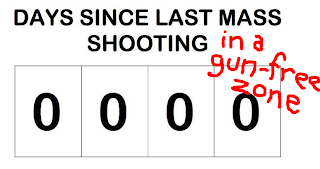 There, that's better.  More honest, at least.  (But you knew that already, right?)  I suppose one could re-caption the thing with a similarly honest phrase ("Moar!  Defenselessness!  Now!") but it somehow seems unnecessary.

But really, the weird part is that I haven't seen more agitprop about this yet--you know, with a whole day having gone by since the incident.  The machine is usually much better than this;  usually, I find out about this sort of thing from a long stream of such jabs, parading by on my Facebook "news feed", within what seems like minutes of the shots fired.

What, haven't Salon, HuffPo, Kos, NPR, WaPo (and friends) given sycophants their orders yet?*

I'm sure it'll happen, of course;  victim disarmers are nothing if not tiringly dependable.  But this does seem odd.

It has taken very nearly five years--astonishing what two quite marvelous little girls can do to one's sense of schedule--but the reloading operation is now officially up.

The re-christening is a new load for .308, pushing 165s with 4064 over WLR in once-fired PMP cases.  Five rounds to confirm the consistency of the starting charge, and get the seating depth correct.  Five more rounds at the starting charge.  Headspace gauge is happy;  tomorrow will chamber-check to confirm, and then load up in fives to the target charge.

Can't say enough good about the press.  Five years, five moves, and the first charge it threw was within half a grain of where I'd left it set at back in Colorado.  Consistency testing got boring quickly.  Everything's tightened back up and lubed appropriately, and we're back!

As soon as possible then:  fresh batteries in chronograph and active muffs;  bring out the grouping targets.  Find a good range day.  Company if possible.  Measure, record, analyze.  And go from there.

Here's looking forward to a productive winter.  :-)
Posted by Kevin Wilmeth at 11:46 PM No comments:

How cool would it be to hang with this guy?

Some people's enthusiasm is just infectious.  Pair that with both an Ed McGivern trigger finger and shooting a "Bill Drill" with a Barrett .50 BMG, and you have Jerry Miculek.


I bet it would be an absolute hoot to hang with him for a day.  That has got to be among the best jobs in the world.

Hat tip to Gunmart Blog.
Posted by Kevin Wilmeth at 12:19 PM No comments:

Seriously, folks.  Just update the dictionary entry now, 'cause we have us a clear winner.  Gabby Giffords and Mark Kelly have made an appearance at a New York gun show, to show all of us what swell, normal, gun-loving folks they are.

Hey now, stop that double facepalm!  That was so totally, completely, not a staged stunt at all.  Honest Injun, no.  Why on earth would you think that?

Thing is, though, this is at least arguably very encouraging:  the degree of "know thy enemy" fail is just staggering.  If this is the quality we are up against, then if they get the war they seem so desperate to get [someone else to start for them], the routing may well be so embarrassing that it might actually restrain the level of vengeful bloodlust among those otherwise susceptible to it.

I don't for a minute, of course, think that Giffords and Kelly actually believe their own bilious act, and although I hate to say words like never, it sure would take an...exceptional recovery to have any sympathy whatever for whoever these snake oil salesmen manage to take;  that is, nearly anyone fooled by this Dynamic D'oh may well already be brain-dead beyond repair.  I can't even bring myself to believe that they think they'll sway anyone with their preening, but maybe the depth of my understanding of narcissistic chutzpah is just insufficient.

You can see my conundrum.  Are they smart, and therefore fully calculating in their deceptions, or are they simply "congenitally insane or irretrievably stupid"?

This is the country we live in.

Remember when we used to make jokes about police states?

You know, when we meant other states?

Presumably this poor kid had a smart mouth on him.  Not very smart after all, maybe, but that's all.  Nothing in his actions or body language is even remotely threatening.  If I'm reading things right, what he was originally accused of was simply being the wrong age.

Get it?  Nothing to see here, citizen.  You do not question your betters at work. The system is sound and the po-po are here for your safety.  Don't let a few "bad apples" ruin it for everyone.  Did we say "bad apples"?  No, no, no.  There is so much you can't see here in this unfortunate video.  See, after carefully unilateral consideration, in which we reviewed our own actions to see if we did something wrong and should give ourselves a good spanking, we instead found that no, the kid totally had it coming, and our officers weren't really "bad apples" after all;  their actions were completely within policy and actually they showed remarkable restraint.  All of them.  Including the second relay team.  And the dog.

(Well...except that in a few months, after this has all blown over, we'll further prosecute the victim, commemorate our own as human "heroes", and maybe put the dog out for stud.  Howya like me now, bitch?)

When it finally does happen and the masses turn on them, it is not going to be pretty.  And completely unsurprising.  The only thing that does seem inexplicable is that it's gone this far already;  that so many people who have grown up reading countless morality tales about bullying and "living by the sword", still manage to excuse it all for nothing more than the "right" costume.

Maybe it won't happen during my lifetime.  But happen it will, and to the surprise only of those invested in the legitimacy of a rigged game.

Posted by Kevin Wilmeth at 4:40 PM No comments:

Research can be painful.

I have lately been trying to do some research into the Airsoft concept, as a training tool.  I do think there is some significant value there, and I'm trying to figure it out as much as possible before spending scarce dollars.

This research process can be excruciatingly painful.

(My apologies.  The following is going to sound horribly elitist and snobbish, but I know of no way to mitigate that.)

What have I learned by seeking out Airsoft-related content on YouTube and textual product reviews?  Oh, lots.  I've learned that:
Oh, there's more.  One could go on.  In trying to approach the question of "just how accurate can one of these guns be?" I ran across a video that advertised testing an M14 lookalike at 75 feet, 100 feet, and 150 feet.  Cool, right?  And the video even begins with the claim that the distances were measured accurately, and footage of meticulous use of a 25' tape measure to set the range.  Cut to our intrepid shooter, who is lying prone, absolutely square to the target, support hand under the rifle's "20-round" magazine, muzzle waving all over the place, squinting like there's no tomorrow, and finger just kinda...drumming on the trigger.  (Maybe it really was an accomplishment that he got all his shots on paper at 25 yards, but how much did that really tell me about the rifle?)  And here's the punchline:  out at 50 yards, after he landed zero for five in semi, he switched to full-auto, fired a full three-second burst (so, somewhere between thirty and forty rounds at the gun's cyclic rate) at the end of which a few rounds hit the 50 yard target, and the reviewer (not the shooter) concluded that--wait for it--the accuracy was much better in full-auto than in semi.

There are times when I think that the better way to do this would be simply to buy the gun in question, and look at it myself.*  The heartburn would surely be reduced.

____________________
* I think I'm pretty much at that point already, and just need funds to spend.  The amount of new info I'm getting from the Airsoft world is pretty small now, especially compared to the acre-feet of drek that surrounds it.
Posted by Kevin Wilmeth at 11:00 AM 1 comment: