Sometimes I forget how much of a geek I am.

And leave it to Tam to furnish the latest illustration.  After losing considerable coffee over this, I thought I'd share it with a couple of gunnie friends.

...in a gun shop long ago and far away, there was a bunch of that Indian surplus .303 for sale. Tamara and A Gunsmith Who Shall Remain Nameless were standing behind the counter when a man came in and began looking over the merchandise.

The man saw the Indian ammunition and shook his head and said "You know, this stuff ain't even got gunpowder in it. It's all full of this stuff that looks like spaghetti. I took some apart with a genetic bullet puller." And then he left.


I wound up explaining the jokes and it was, of course, a whole lot less funny that way.  (On linking back, I now notice that Tam provides explanatory links, inline.)

Okay, I'm a geek.  And I admit, I'm torn between wistfulness that fewer and fewer people get the references, and a purely prurient wish that I could have been there to see that.  :-)
Posted by Kevin Wilmeth at 11:42 AM 1 comment:

...but this, my friend, is what one looks like.


Cody Wilson rides again, doing what he does, which is work that needs to be done.  And my word, does he do it with style.

In the wake of the governor’s veto of the Ghost Gun ban, Wilson’s CNC mill could make untraceable guns all the more accessible. And as the video above shows, Wilson isn’t shying away from that face-off so much as directly confronting gun control advocates. He’s gone as far as applying for a trademark for the term “Ghost Gun,” a move that could limit how gun control advocates are legally able to use it.

“This wouldn’t be worth doing if Kevin de Leόn didn’t know about it,” Wilson says. “What excites me is giving this world to the politicians. Our strategy is to literalize and reify their nightmare, to give them the world they’re talking about.”


One just has to step aside, to make room for all The Awesome in that.  It's hard to imagine a more quintessentially American spirit than Wilson's, and long may he haunt the nightmares of anyone that presumes to rule over others.

So, yeah:  hero.  Brass balls and all.  Large as life and twice as natural.  If the term must be used, then by all means I'll use it where it's deserved.

Posted by Kevin Wilmeth at 4:52 PM No comments:

I caught first wind of it from Kent McManigal on Facebook, and the realization of what was going to be behind the link hit me even before the mouse pointer got there. 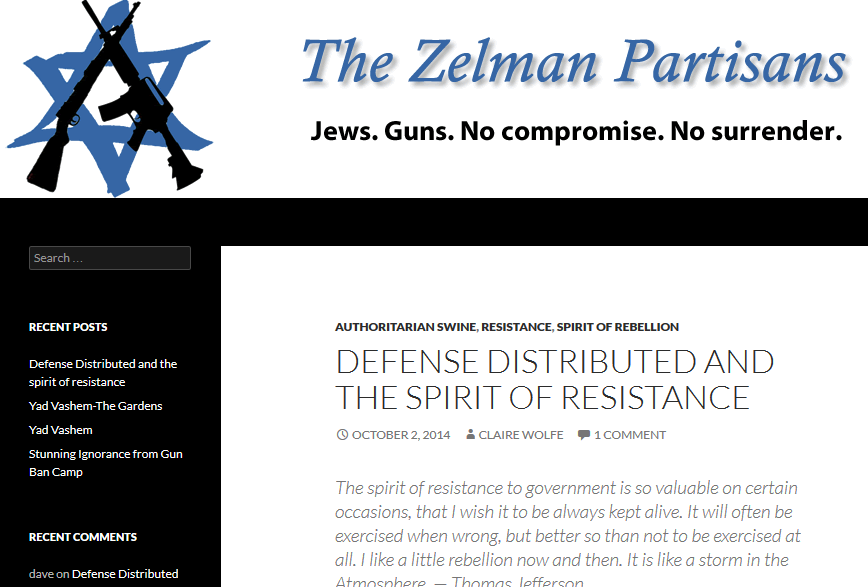 Posted by Kevin Wilmeth at 1:10 PM No comments: