I continue to be impressed with the AUSA assigned to the forfeiture in rem case against Gunsmoke Guns.  From her I now learn, in another timely response to an emailed question, that the paperwork items I recently filed to become an official party to the case (my interest is simply to get my 03 rifle and 1911 pistol returned) were indeed successfully received, and she further added some intel that she is starting to advocate for those parties in my position, directly with counsel for Gunsmoke.

It's not over for me until I have my property back in my hands, and of course the frustration that any of this happened in the first place is by no means forgotten, but I have to admit I had not expected this much accommodation from an AUSA, and I am thankful for it.  I'm sure I'll have more to say when it's all over, however it turns out, but in the meantime I do have a few things to appreciate, and have a need to say so.  The information and ideas from Claire, Len, Mama, and El Neil were hugely helpful, and so has been the information and assistance from the AUSA on this case.

"You will give her an apology."
"Because all this only goes one way, right?"
"Well, maybe we'll just have to settle this ourselves."
"Um, no, we're not going to do that."

Apparently I am to be tested, in my good mood and recent metaphysical recharge, by multiple inexplicably inane events in which my input is irrelevant at best. First it was one of those simply absurd flare-ups of a knee, in which I awake from the staggering physical rigors of a nap, with a suddenly limited range of motion, likely driven by the obvious swelling for which I have absolutely no explanation. Following that, it was being aggressively accosted, yesterday, for failing to admit my unconscionably boorish and self-evidently misogynistic behavior ("Oh, the board has been informed...") during an episode of a few weeks back, when I actually lost my patience with someone's conflicting information, and had the unmitigated gall to call it out and request escalation to sort out what I needed to do. I figured the episode was behind me when two of the board members separately confirmed that I had called out the conflicting information accurately, but apparently not with the principal, nor the nearly comically vengeful spouse, who of course wasn't there.

So okay, I'm being tested. Not on the walking-away-from-the-thinly-veiled-threat part; hell, I've spent most of my adult life studying how to avoid fights. That part is easy. Nor is it the idea that I find it hard to admit when I do something wrong. I do things wrong and poorly all the time, and if anything I'm a bit self-flagellating about it.

The test is in rattling me with the sort of wear-you-down things that are mostly outside your control, yet impact your life in a way that makes things harder, not easier. So, in this case: limited range of motion in the knee, along with the discomfort of swelling; and now a persistent roadblock to working within a group that is very important to one of my kids. (I could be wrong of course, but my perception of the personalities of both my attackers rather strongly indicates a good chance of extended grudge-holding. Lovely.) All within the context of an extended period of unemployment, etc.

Very well, let's pass that test, then. One of the many things I love so dearly about "Brother Sean"* is that I can't lie to him, even when I can lie to myself. As he has done before at times when I really needed it, he put himself out for me on this trip, and helped me to see more clearly where I do lie to myself--where I allow things to get me down by abandoning who I actually am, trying instead to construct a theoretical "better me" that does not yet exist--who may never exist--and thus missing the opportunity to truly adapt.

Yes, I've got bad knees. Yes, I now have an aggravating social problem to unfuck. I've got all the other headaches I had before the trip, too, and clocks are still ticking and the timing is just terrible.  Yup, got all that--and the only guy I've got to deal with it all is the one in the mirror.

He's got a lot of flaws, but he's mine, and in the end "he'll do to ride the river with". He's going to wake up tomorrow morning and remember to be authentic to who he is...and take it as it comes.

Seen today on the TwitFace. 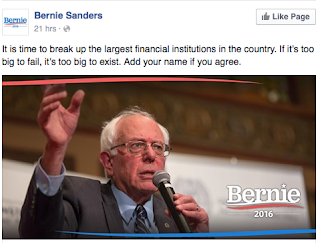 Well, perhaps there is something we can agree on after all.  Personally, I'd fully approve if all you authoritarian dickheads--you know, the entire control structure of that One Institution To Rule Them All--simply oozed on home and never again tried to force yourself on others.