Bill Still: worth a peek.

For anyone who needs to be caught up on the insolvency problem in less than ten minutes, this is pretty clearly stated.


This guy's politics are admirably absent from the discussion.  Love it.  Perhaps I'm being naiive here, but I like to think that's because more and more people are recognizing that politics--all politics--is the problem, and not the solution.


Government* is a disease masquerading as its own cure.

____________
*Some make noise over "corporations" being a worse problem than "government", which makes no sense since corporations are literally and wholly creations of government.  That these two entities collude with one another is in no way newsworthy, and is very useful as a red herring;  those who insist on pursuing the entirely semantic argument merely divert attentions away from meaningful dialogue.  (The colluders love that, by the way.)
Posted by Kevin Wilmeth at 5:30 PM 1 comment:

Answer me these questions three...


Sometimes very simple questions can cause profound cognitive dissonance. Here is a series of very simple questions I like to pose to people at random, especially if I want to make their heads explode. (For the record, my head was long ago exploded by these simple concepts, so I’m not claiming superiority here.)

It's worth reading the discussion too--Rose presents it much better than I usually do.  And so, it's now part of the library.  :-)
Posted by Kevin Wilmeth at 5:07 PM 1 comment:

From the Center For a Stateless Society.  Great article, containing this fabulous giggle line:

If the price of keeping Joe Lieberman in power is you staring over a plow at the ass end of a mule all day and lighting your home with candles or kerosene at night before collapsing on a bed of filthy straw, that’s a price Joe Lieberman is more than willing to have you pay.

The real money lines are elsewhere, but good snark is always appreciated.
Posted by Kevin Wilmeth at 12:44 PM No comments:

Assange in British custody. (Bet he turns out to be made of wood!)

Remember this line from the film Se7en?


Tell me, what was the indisputable evidence you were going to use on me right before I walked up to you and put my hands in the air?

Via Chris Floyd I learn that Julian Assange is now in British custody, having "turned himself in".  In some ways that seems anticlimactic, but I'm sure Assange has his reasons.  He even published a message in The Australian before doing so.  Among its contents:

WikiLeaks has a four-year publishing history. During that time we have changed whole governments, but not a single person, as far as anyone is aware, has been harmed. But the US, with Australian government connivance, has killed thousands in the past few months alone.

US Secretary of Defence Robert Gates admitted in a letter to the US congress that no sensitive intelligence sources or methods had been compromised by the Afghan war logs disclosure. The Pentagon stated there was no evidence the WikiLeaks reports had led to anyone being harmed in Afghanistan. NATO in Kabul told CNN it couldn’t find a single person who needed protecting. The Australian Department of Defence said the same. No Australian troops or sources have been hurt by anything we have published.

This matters not, of course, to those who call openly for his murder, or worse.  Those who lie continually, professionally, simply cannot abide having their secrets exposed.  (How telling is it that, for all the sanctimonious bluster about the grievous potential harm these leaks might somehow cause, that there is almost no denial of the veracity of their content?  That, itself, is astonishing.)

Now, of course, the international wolf pack can have their way with him, and (as usual) will probably thoroughly enjoy that.  Assange, of course, will turn out to be a witch (just you watch), and we'll burn him at the stake with great fanfare.

The real story, of course, is not Assange at all, nor even WikiLeaks itself, but the idea of WikiLeaks.  What will become of it?  The modern example has now been set.

What will we do with it?  We've got a choice, and it's time to decide.  (And let's be very clear about this:  Master will make note of our response, and act accordingly.)
Posted by Kevin Wilmeth at 5:42 PM No comments:

This is an effin' Onion headline, right?

It's getting so you just can't physically keep up with all the stupid anymore.

From Radley Balko at The Agitator.
Posted by Kevin Wilmeth at 6:16 PM No comments:

The virtual war flares up.

(And obviously, by "the virtual war" I am speaking of the war against every one of us, by those who claim to represent us.)

This is good news only in that it is continuing evidence that someone (in this case, WikiLeaks) has found a way to hit Master where it actually hurts, prompting every sort of flailing, desperate response.  Via Brad at Wendy McElroy's site:

1. Every WikiLeaks server, it seems, has come under DDoS attack shortly after coming on-line. A private individual has claimed responsbility for at least the first attack.

3. A DDoS attack was also launched against PayPal's blog site over the weekend, "apparently prompted by PayPal's decision to cut off money services to WikiLeaks last week."

4. Presumably in retaliation, a web site used by Anonymous came under attack yesterday from an anti-Wikileaks group.

As I said yesterday: in cyberspace, everyone has a nuke. And they've started to fly. Keep your head down, and stay safe.

He's right;  this was of course inevitable.  What's depressing is that these "anti-Wikileaks" actors might actually be operating privately.  Let's be honest:  there would be no surprise--not one bit--if we some day find out that some or all of these attackers are actually on the public dole in some way or another.  Wouldn't be the first time, wouldn't be the last.  If you're honest about the cui bono question, you have to admit that--because the whole point of destroying WikiLeaks is to preserve the state's "right" to secrecy and deliberate lying to that same end--the concept of patsies, stooges, bag men, and, uh, creatively-incented goons is absolutely and inherently an "on the table" option worthy of investigating.  (And if you don't think "your" government is capable of this sort of deception, you have been asleep at the wheel and really should wake up before you hit something.)

In this case, either they are, or they're not.  If they are officially tied to the state--well, hey, we already know to expect that from the kind of people who would exploit the good will of the masses to letigimize theft, fraud and murder.

If they're not--if they really are operating privately--then it's just sad to see continued examples of slaves fighting so hard to perpetuate their own enslavement.  Apparently, Master has done its propaganda work well.
Posted by Kevin Wilmeth at 5:55 PM No comments:

For anyone who wants to make an issue of who or where this is:  I don't really give a rat's ass.  Neither the who nor the where, in any way, can diminish this what.  (Even if it turns out to be a pure police-state propaganda production in the finest false-flag tradition, the spirit of George Hayduke is still on display here.  Faan-freakin-tastic!) 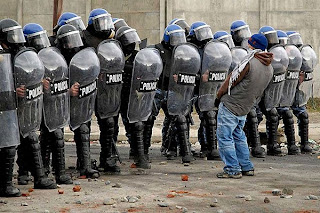 Quote of the day.

Nailed it.  In every detail.
Posted by Kevin Wilmeth at 5:48 PM No comments:

Now this is funny.

WikiLeaks is, plain and simple, one of the most important happenings in modern history.  You can tell just by observing the ridiculous things that governments and their apologists do, to try and make it go away.*

The latest is that the US Department of State has apparently issued a threat to anyone who actually reads the documents, because, see, they're still classified.

The U.S. State Department has imposed an order barring employees from reading the leaked WikiLeaks cables. State Department staffers have been told not to read cables because they were classified and subject to security clearances. The State Department’s WikiLeaks censorship has even been extended to university students. An email to students at Columbia University’s School of International and Public Affairs says: "The documents released during the past few months through Wikileaks are still considered classified documents. [The State Department] recommends that you DO NOT post links to these documents nor make comments on social media sites such as Facebook or through Twitter. Engaging in these activities would call into question your ability to deal with confidential information, which is part of most positions with the federal government."

Now that's funny.  The FedGov lecturing anyone about the importance of honesty, good character and fidelity to a solemn promise is always good for a larf.  And how about the simple, brilliant absurdity of documents now in the public domain still being classified?

Snarky semanticists might point out that Master, here, is ostensibly only addressing its "employees" with the threat.  Presumably this is on the basis of, you know, all of its employees making a promise not to partake of the double-secret, Drogan's Decoder Ring, X-K-Red-27-technique, classified information in the Wikileaks documents.  But as the above notes, this also applies to prospective "employees" in the form of students, and hey, let's not kid ourselves:  who here wants to suggest that Uncle Sam would hesitate to come after any one of us if, in its sole discretion, it decides that we know too much?

(It's also not lost on some of us that the threat specifically mentions social networking, as the implied means of snooping and sniffing to produce evidence of...not respecting information that doesn't belong to you.)

In the end, though, the beauty of Wikileaks is that it exposes the state for what it is:  coercion and violence, and nothing else.  The massive attempts to shut down access to the documents.  The open calls for the murder of those who have done nothing but deliver on the empty promise of state transparency.  (Anyone here think that WikiLeaks would ever have happened in a world where the state did not lie about...well, everything?)  The mendacious attempts to shift all moral culpability from the perpetrator to the messenger.  And here, the threats against "its own" in a pointless attempt to shut the barn door after all the horses have got out.

It'll be something else, tomorrow.

Because they're still classified.  What an effin' hoot.


_________________
* It's not a new story.  Zeus was pretty pissed at Prometheus for doing the same thing, and likewise handled it in an entirely authoritarian way.  (For any authoritarians reading this:  note that although Zeus certainly gave Prometheus the business in punishment, what he could not do was undo what had been done.  Also, on the "legacy" topic which seems to occupy you folks so much:  remember that Prometheus is usually heralded as a great champion of all mankind, and has been ever since all this happened.  Have a nice day! :-)
Posted by Kevin Wilmeth at 6:35 PM No comments: