File this under "Do you understand?"

Sure, we've long known that the Establishment propagandizes for the Establishment.  But this Greenwald article does make the case in a way that should be digestible by a larger audience of fence-sitters than I'd ever be able to reach.

We’re bravely here to report that these two incidents perhaps coincidentally occurred at “about” the same time: There was a hospital that blew up, and then there was this other event where the U.S. carried out an airstrike. As the blogger Billmon wrote: “London 1940: Civilians throughout the city were killed at about the same time as a German air strike, CNN reports.”

The entire article is designed to obfuscate who carried out this atrocity. The headline states: “Air attacks kill at least 19 at Afghanistan hospital; U.S. investigating.” What’s the U.S. role in this incident? They’re the investigators: like Sherlock Holmes after an unsolved crime.


This, too, pretty much says it all: 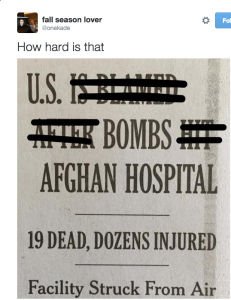 Now, if only we could get more folks to remember how this all works when the subject is "Plebes with gunz, ZOMG!", or "Working within the system is the only way to get results."

(That includes you too, Glenn Greenwald.  You may be better than most, but you too have your blind spots.)