This sentiment seems to be reaching meme-level proportions lately.  Presumably it has been handed down from The Hive Brain to the practicing faithful, who perform their phone-tree duties on cue as always.  And so this is currently being vomited onto my Facebook feed with gagging regularity today: 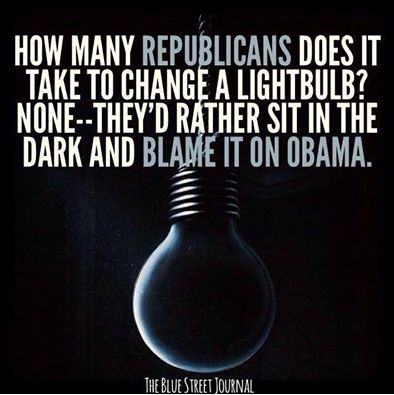 Jeez.  This crowd has actually found a way to weaponize irony.

Look:  I detest the Reich-publicans just as much as I do the Demon-rats, and for the same reasons, really.  (Most of all, the transparency of both parties' lame attempts to dress up their cynical intrasquad games as something other than what they are.)  There is nothing here that constitutes any sort of defense of the R-wing's vision for Total Tyranny.

Still:  oh, come on.  The above coming from the "It's still all Bush's fault, two years into BHO's second term, and anyone who says differently is a wascawwy wacist!" crowd?

Of all the casualties that modern "civilization" has inflicted upon humanity, the most irritating may well be the complete and total death of shame.
Posted by Kevin Wilmeth at 11:41 AM

Just a suggestion... Not having a "facebook" page to target might do good things for your blood pressure.... :)