Your 'Uncle Frank'-ism for the day.

Just when I'm about ready to give up Facebook again, I seem to get a string of things that are actually useful.  Most of those are usually contacts with people about whom I would otherwise know nothing, but today, there was also this, via a site I don't know called Libertarian Money. 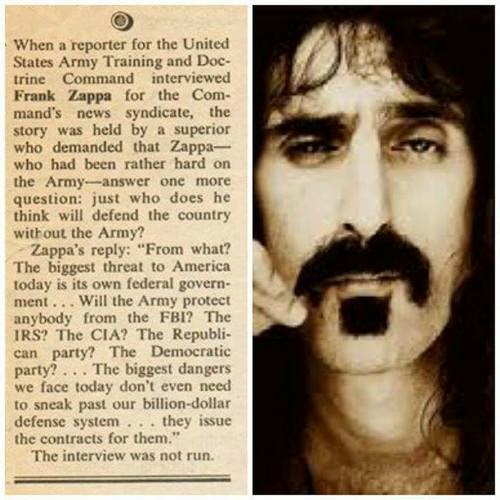 It's hard to explain my continued amazement at Frank Zappa.  (Put as briefly as possible, I am not sure I know of a better use for the word genius.)  It's nearly impossible to explain to non-musicians, who usually either see him as a noisy, shock-jock lyricist, or...well, as a noisy, shock-jock lyricist.  (Many who appreciate him, do so only for that.)  It's a little easier to explain to someone who plays an instrument, and it's easier still with someone who is a geek about it--the geekier the better.  (For any non-musicians reading here:  let's just say that Frank's musical skills are at least as legendary as those of Miles Davis or Duke Ellington.)

But it wasn't until I figured out--really, actually figured out--that politics isn't the solution to the problem, but rather is the problem, that I discovered the next plane of my admiration for the man.  It's not so much that he often said things that I would now find agreement with, but rather that somewhere along the way I realized that personally, he simply shrugged off everything that wasn't real.  No fanfare or peacockery;  he just did.

Sure, he was known for poking fun at things that aren't real, but hell, lots of others did and do that too, without being conspicuously more than that.  In the blurb above, what stands out is what happened so often with Zappa:  the interview effort completely misunderstood its target and had no answer for what to do about the unexpected result.  I strongly suspect FZ loved this--to be continually underestimated, and to not care what came of it.  It is easy for the well-intentioned to presume that he would have been upset that the interview didn't run--but that would be missing much of the point!  (Being well-intentioned by nature myself, it took me an embarrassingly long time to realize this.)

Consider his own musical genius.  During a time when the popular celebration of musical complexity and virtuosity grew from a counterculture beginning to a state of such self-indulgence and overhype that the next musical wave (punk) was specifically an "eff you!" reaction against it, Zappa was himself poking fun at it nearly the entire time--with the satire itself often buried in structures far more complicated than the chest-thumpers on the receiving end of the ridicule had come up with originally.  (And Zappa was skilled and subtle enough to intermix the anti-peacockery with genuine homages to those who deserved them.)

All this (and believe me, this is brief) illustrates a mind that I admire more and more with every new thing I learn.  He understood the world of the seem and the world of the real nearly without flaw, and played them off each other like toys, on a quantity of levels that I can hardly believe, and yet am still discovering.

The most amazing part is that I don't think he could possibly have done it by accident--and yet the significance of that seems to have been singularly unimportant to the man himself.