An old paint can lid, two punches with a nail, a couple of twists of the wire: 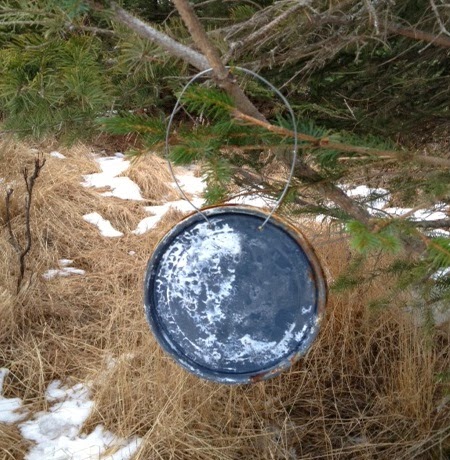 A baked beans can top, done up the same way: 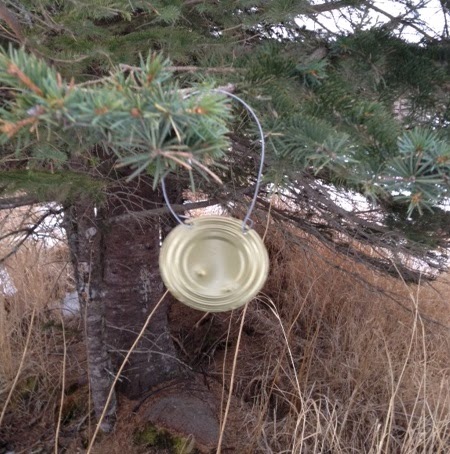 This strikes me as very workable.  They should be easily movable and weatherproof, should interchange easily as they get shot up (note the two minor dents in the second picture, a test pair from the green-gas 1911 from very close--maybe three yards), and should respond well to spraypaint when visibility or contrast is required.

They're inexpensive, obviously, but they solve some other problems as well.  Ricochet is much, much better than with heavy steel (e.g., steel spinners for .22 rimfire) or other fixed surfaces.  With the baling wire attached at two points, they actually seem to strike a nice balance between reactive feedback (the ping sound and movement) and not spinning so much that you can't put a pair on it at speed.  The wire loops should be friendly to tree-branch attachment, without being so heavy or tight that it would dig into the tree.  And of course there are all kinds of sizes for steel can lids.  (The paint can lid, actually, produces a most satisfying sound on being hit, and being larger can be used at greater distance with normal perspective, rather than being used at closer distance with reduced perspective.)

With a little more thought, I wonder if I could get even fancier with the concept.  Different-colored disks could be brought together for shoot/no shoot scenarios, or maybe I could fashion Airsoft Pepper Poppers (maybe by tin-snipping open the can itself, and using the whole thing) and learn how to calibrate them for a given power level.  I hadn't thought about this before now, but if ranges are kept Airsoft short, target resets for thing like falling Poppers may not be nearly so annoying.  :-)

Their big dependency, really, is that they presume that the BBs really are biodegradeable.  I'm still running my first test on that, but if these things really do break down reasonably well, this may be a great poor man's solution to fancy reactive targets.

Next:  get in a few serious testing sessions, and see how they hold up.

Interesting, but probably not going to be allowed on most club or public ranges. In any case, how would you use these in an area with no trees to attach them to? :) Might need a tripod or frame of some kind that could be stuck into the ground.

Any reason these couldn't be used for regular guns and ammunition? I'm really tired of paper targets. LOL

Oh, I'm not going for universal design here. These are for me, in a place where we don't exactly want for trees. (The targets in the pics are just a few yards off my front porch.) But with good stiff baling wire, they really could work with many improvised mounting options, and I also like the idea that I could stick a half-dozen of them in a backpack and carry them on a walk.

(For use with Airsoft, I think that a few old sawhorses just might be the quickie way to become a "put it anywhere" setup. This experiment may come sooner than later, as my neighbor seems to be getting more interested in joining me in this adventure. Excellent!)

I'd imagine they'd work well with firearms, too; they'd just get chewed up a lot faster. (That paint can lid in the picture currently has a couple hundred Airsoft rounds on it and looks not much worse for the wear. By contrast, even a .22 would have chewed out the center completely by now. :-)

I'm with you on wanting to move away from paper. Paper is necessary for zeroing and diagnostics, but not for field or practical training. For firearms, I still like steel, even with its limitations. Set up properly, they're worth the investment, and are so satisfying when training (especially rifle gongs, way out there).

One thing I haven't tried out, but would like to, is a few of these newer designs (I've seen both steel and synthetic "shoot-through" designs) that either roll or bounce like jacks when hit. The appeal there is that you don't know exactly where it's going to land, so you don't get ingrained with a fixed target setup. Plus, at least theoretically, as you hit it, it moves away from you each time. You could either use this behavior to train for the need for increased precision as a fight goes longer (by maintaining your position), or you could use it to train on your own reactive movement. Either way, this sounds like a good idea to me.

Depends on what you are training for, of course. :)

I may try this on my own property with the .22 pistol, but that's the only thing I can shoot up here. Might not be welcome at our gun club, simply because we had such a bad time with non-standard targets long ago and the rule is inflexible now. Nobody wants people to start bringing bottles and cans to shoot at again. sigh

But, come to that, I don't know why I couldn't rig a swinging paint can or other such target on the established target holders there. Might catch on! :) And the worst that would happen is someone asking me not to do that again.

I have a couple of the duraseal targets you mention, and they work well. The tumbling target rolls over to a new position when hit. It holds up to 9mm and 45 ACP without being destroyed. It does develop sharp edges from hits, so you have to be careful picking it up.
I also like the duraseal spinning or swinging targets with the bottom weight. So far they have held up very well.
For alternate targets, I use empty pill bottles, or K-cups. But you still have to re-set them. I like the lid idea. You could use plastic lids too, off coffee cans, butter containers, etc.
--Deb, south NH

Thanks for the input, Deb. It's kinda cool to have a setup that can be quite that flexible, isn't it?

I like the pill bottle idea for Airsoft; it would be a pretty simple matter to put a hole through the lid and hang it from a tree branch, and one could fill it with a little sand or dirt to adjust the amount of swing/reactivity.

Will cogitate a bit more, but thanks for the ideas in the first place. :-)