See, this is where you lose me.

So lately I've started to see this image pop up in "friendly" circles: 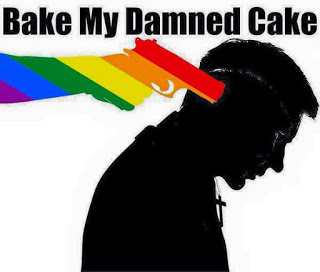 This is actually a bit infuriating.

It's not that the message is wrong, per se;  I've got no argument that the giant "rainbow" mob (which has co-opted the demographic of people who are, you know, actually gay just like little-L libertarians get regularly co-opted by various ne'er-do-wells who have despoiled their own name and need new legitimacy) will now prove to be most enthusiastic about pressing their newfound political advantage against...well, their political opponents.  And we all know that in politics the penalty is always death.

What's annoying is that

Pick one from each column and the functional dynamic is exactly the same, despite any quantity of sound and fury to the contrary.

See, the concept behind the image itself is extremely powerful--if you stand back far enough to see it for what it is.  "Bake My Damned Cake", et al, is simply political force, however it may be determined by whatever mob has power at the moment.  The rainbow, et al, is simply the political mob, legitimized by whatever diabolical means the system can snow enough people over with.  And of course, the cross, et al, is simply you and me--the Mundanes, the peasantry, everyone.  As George Carlin so aptly put it, "it's like a great big club...and you ain't in it."  A less savory character called it "Who does what to whom."

Yes, the "rainbow mob" is currently whooping it up and generally carrying on like petulant children who have got their way and are milking it for all it's worth.  I'm not arguing that.  But it is a bit discouraging to see otherwise thoughtful people making it SO DAMN EASY to retort with the complaint that all they care about is keeping the gays away.  And thus enabling millions to simply ignore whatever else they may have to say.

Indeed! From my latest: http://www.thepriceofliberty.org/?p=7390

Now consider most of the rest of the population, on EVERY side of EVERY issue; the people who seem to believe that they should and must find some way to get everyone else to accept their views as the ONLY correct view.

Now, that would be unremarkable if the method for that was persuasion, using their own lives as a positive example. Unfortunately, that’s not the case all too often, and far too many – remember that this applies to ALL “sides” of the issues – seem to think nothing of using force, fraud and outright lies, especially the force of government, to push their agenda and punish all who will not submit.

Anyone who wants to force anyone else to do something (or not do something) knows the best horse to ride in on is GOVERNMENT! (Notice, I didn't say most efficient :-) )

PS - I'm borrowing (stealing) this post - with attribution and link, of course!

The chickens have come home to roost, the shoe is on the other foot. Conservatives used the power of the state to repress gays, and now that the latter have (for the moment anyway) got the upper hand and do the same thing - "waaaah!"

People, it's not MINDING YOUR OWN BUSINESS to prevent gays from marrying or making their lives generally difficult.

That's lesson number 1. I wonder how many conservatives will learn it? Lesson number 2 is, even assuming there are some gay assholes out there, what gives them the ability to make life difficult for others? GOVERNMENT. That is where you should be focusing your outrage and resistance.

Paul is apparently unaware of the lesbos who stole 135,000 dollars from a bakery in Oregon because they refused to bake them a cake for their wedding.

But I guess they were asking to be robbed. No longer do people have the right to do business in the way that aligns with their morality; now moral busybodies can use the state to force them bend over them or else be silenced.

And marriage isn't a civil right to begin with. Most gay marriages are open, viz. they screw other people. So most of them are basically asking for a sheet of paper saying that their relationship is just as good as the evil straightses even though their actions prove it's not.

Slippery slope is a fallacy in your college debate team (unless it's infested with moonbats), but in politics it's a certainty.