I think I figured out, today, how I can rig up a chronography session so as to shoot off my front porch, mostly rested (right elbow unsupported), and shoot through the chrono at a measured distance (15') enroute to a target at a measured 10m (the de facto airgun standard).  This can be the basis of combined chronography and accuracy work for the relative quick-testing of new pellet/powerwheel combinations.  Notably, after setting chrono up at the further distance, I no longer had any errors from it.  Sure, it was a sunny day today, but I think I learned something and will go with it.

I continue, as well, to learn about the Caldwell Ballistic Precision app that I'm using on my smartphone.  It's got its quirks, but it's proving to be pretty handy.  Apparently it's set up so that you can designate (upfront, not after-the-fact) a "saved group" and capture a bit of metadata along with your shot string (e.g., temperature, humidity, distance to chrono, pellet used, etc.), including a photo of the target grouping.  I suppose I should start carrying in my pocket a dime and a quarter, which are often used in airgunners' pictures to give context to the group size.  (Airgun hunters speak of the one-inch "kill zone" for most quarry, which is just about the size of a quarter, and of the 3/4" zone for some critters, which is just about the size of a dime.)

I'll have to develop the practice a bit, to arrive at a consistency in picture framing, naming, and repeatability of setup, but I think this is going to be workable.  The distances are known, and at the 10m target distance one can probably successfully weed out which pellets just aren't shooting as well as others.  Check out these two strings, in the context of my first experiment with the powerwheel set as low as it could go.  This string was shot with the wheel set at "2.1":

Note how much more consistent this string is, than the other one.  The deviation and spread are much tighter, and the velocities begin to drop off steadily at the end of the string (once they do this, you can stop shooting, as you've got the answer you came for).  Based on what I've learned from Tom Gaylord, I believe I can "read" this data as suggesting that this configuration is good for about 10 shots (#2-#11) where the spread is even tighter, and since there is only one shot before the valve "wakes up" into that ideal series, that means that the starting pressure of 3000psi is pretty close to ideal.  (Sometimes, if the string starts to tighten up after several shots, it may suggest that the ideal fill pressure is not the 3000psi max, but maybe something lower, like maybe 2700psi.)

Now in terms of statistics, this one is starting to look interesting.  In particular look at how tight those first five shots are, with a pretty steady decline thereafter.  This one seems to suggest that the fill pressure is right on.

And at this point I had just figured out how to set the target in the right spot to get a group while chronographing.  This is what the final ten shots of the string did at 10m: 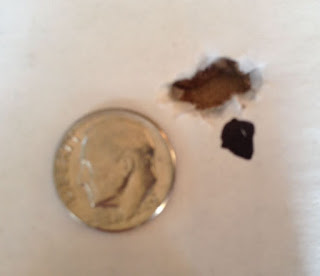 That's just about a quarter inch, center-to-center.  (The black dot is my crude aim point.)  Hey, I'll take that.  The rest was improvised, my right elbow was unsupported, and I wasn't exactly bearing down for these shots.  Looks like it may be worth trying at 25, and possibly even 50.  Especially since the power level seems more than acceptable.

At this point I decided to adjust the power wheel to 6.10 and shoot a few more shots, to set the valve for a full test at 6.10.  These were just fun shots, not chronographed;  they each clanked with a satisfying smack on the rimfire spinner at 25 yards.

When refilling after this series of about 20 shots (which took it down to about 1200psi), the behavior of the Hill pump seemed a little quirky.  I will have to pay attention to how it behaves going forward!