There's a reason they call it the TwitFace. 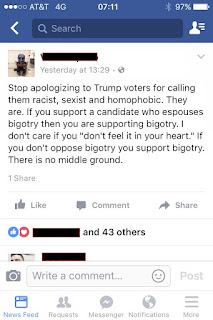 Well there, Massuh Superior Being suh, that's quite a statement there.  (Personally, I'd say the worst insult anyone could throw at me is to call me a v*ter in the first place, but then I'm a known heretic.)  It deserves a far more thorough fisking than I have any time to assemble here.  Nonetheless, presumably you, paragon of civic virtue and All That Is Good, Healthful, and Nonfattening, "supported" a different candidate, and very likely "supported" the current administration through both of its terms, as well.  (I suppose it's possible you didn't, but somehow that seems vanishingly unlikely from the evidence here.)

It would be childishly simple to ask you, in light of your strong declarative statement, why you would prefer a candidate (and a sitting president) who believes that dead Mexicans (that's brains-blown-out dead--we're not talking about a bigotry of words here) are an acceptable political cost of manufacturing the public impression that American gun dealers are arming narcotraficantes on the sly.  (Oh, you never heard about Operation Fast And Furious, reported on almost daily for what, a year?  In which the ATF deliberately armed the cartels so that their crime guns could be traced back to US gun dealers, supporting the FedGov's claim that 90% of Mexican crime guns trace back to the US?  Yeah, both Hill and Barry were all over that one.)

It would be similarly easy to ask you, again in light of your morally upstanding and good-for-the-climate statement, why you would support candidates and presidents that not only argue openly for extrajudicial killing and indefinite detention, but practice it regularly.  As but one example, assassinating not only an American citizen without trial, but shortly thereafter his teenage son, offering the functional equivalent of "sucks to be him, he should have had a better dad" by way of explanation.  How many hundreds have been killed with drones, or more traditional methods of extrajudicial war?

You're okay with all that, right?  Seeing as how "there is no middle ground", and all.

One could go on.  It's not difficult.

But you're smart, and enlightened--so much moreso than half the American public, which you keep telling me has simply lost its mind because it doesn't move in lockstep with your beliefs.  (Oh, you don't put it that way, but that's always what it comes down to.)

Obviously they must have been conned. 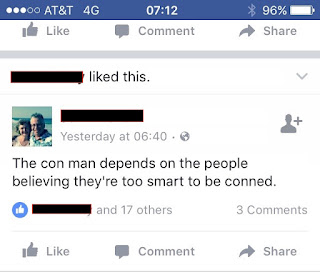 I'll bet you think you appreciate irony and wit, too.

F&F was only ONE of the operations run by the BATFE Field Divisions across this country. There are twenty-five Field Divisions in that organization, and smart money says every one of them had something similar. BATFE Agent Hope McAllister from their Phoenix Field Division (which ran F&F) is on an audio recording released by the BATFE IG admitting that three guns were recovered at the scene where BP Agent Terry was murdered, not the two that were reported. The third gun had been sold in Dallas, which is not in the area of responsibility of the BATFE Field Division. It is, however, on the front porch of their Dallas Field Division. But I'm sure no large FedGov entity would have a problem with another such entity playing in their sandbox. The BATFE Field Divisions in the Midwest were running weapons to the gangs in Cleveland, Chicago, Detroit, and St. Louis. Down here in Florida, my local BATFE Field Division is in Tampa, and they were running weapons to Communist terrorists supporting former president Zelaya Honduras, since it's easier for them to do that than to ship stuff all the way to the Texas/Mexico border. Treason runs deep in the Federal "Law Enforcement" ranks...