NOTE: This was originally published as an Anchorage Libertarian Examiner article, with the intent that follow-up topics would appear from time to time. During the writing of some of the follow-up topics, it grew reasonably obvious that there was more content there than probably made sense for that venue. As a consequence, full discussions will appear here, and future Examiner articles will link to these pages. The decision is somewhat arbitrary, but this seemed to make more sense given the purpose of this blog and the Examiner column. 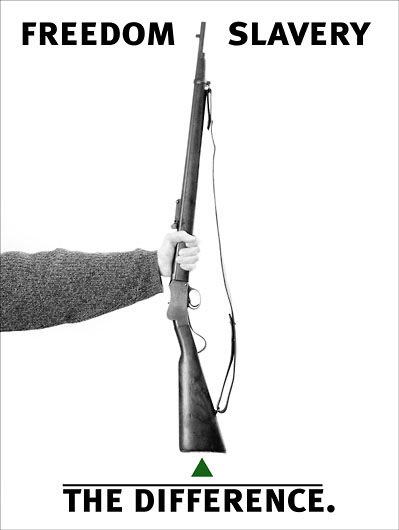 Courtesy Oleg Volk, A Human Right
A lot of ink is out there praising the value of the rifle in the hands of sovereign individuals, without any specific reference made as to what kind of rifle that may be. In general, it is good that we stay away from technical discussions that might feed the ridiculous red-herring "this rifle good, that rifle baad" arguments that disarmers latch onto like flies on shite. However, not all liberty-lovers are riflemen, and sometimes questions come up concerning the topic of just what we mean when we discuss the rifle as a tool of the free man. It is a valid topic!

I certainly can't speak for all riflemen, and in fact do not presume to, but in the interest of getting good information out there, the following may prove useful either to someone who simply wants credible information for discussion, or who might actually be looking to become a rifleman.

My strongest influence, by far, is that of the late (and sorely missed) Jeff Cooper, known primarily for his development of the Modern Technique of the Pistol, but who also contributed incalculably to the technique of riflecraft as well. In the early 1980s, Cooper systematically took up this very question of what is a general-purpose rifle, and developed an actual rifle design to support this definition. His classic work The Art of the Rifle should be considered required reading for anyone interested in this topic.

Bear this influence in mind, and make whatever mental adjustments you deem necessary.


What might one call upon a rifle to do?

By general-purpose, we imply that a rifle might be called upon to do different things, and this seems rather obviously true. There are certainly a great many enjoyable sporting games that involve rifles, but as far as "serious purposes", a sovereign individual might employ a rifle to do the following:

(Of interest: note that the first and last items do not necessarily even require that shots be fired...although they are rendered meaningless unless that capacity is present.)A good rifle is uniquely capable of supporting all these tasks, none of which are trivial even on their own. Take the tasks together, and one begins to understand what a remarkable device a rifle really is. The variation in potential target size may be enormous, and the distance to engagement may range from arm's length to as far as an individual human can see.

This is the quintessential value of the rifle--it is a weapon capable of delivering an adequate blow on a suitable target, in time, at any range that the target may happen to be when it requires engagement.

All these terms are somewhat plastic, although the point is the same for any reasonable set of variations. The general purpose rifle is capable of doing anything that a rifle may be called upon to do, even if it may not do it better or even quite as well as a more specialized weapon. And so a fifteen-pound, four-and-a-half-foot long rifle with a thirty-six power riflescope, firing a cartridge that allows for a five hundred yard "point-blank" trajectory, may indeed be easier to hit with at a half-mile than a lightweight sporter...but it may prove completely useless in a whirl-and-fire situation at ten yards, and is certainly a chore to lug around all day. Likewise, an instrument such as the .30 M1 Carbine is just about as light and handy a shoulder weapon as can be had, but its trajectory can be limiting to a competent rifleman, and its power level can be uninspiring if the target is a large animal, or returning fire from a distance. The sort of rifle we discuss here is able to handle both of these situations very nearly as well as the more specialized arm; fortunately, there are a lot of rifles that fit this bill.


What a general purpose rifle is not

This is probably where I will ruffle the most feathers among the gunnies, but I'll do it anyway: a rifle is not a carbine. The word "carbine" connotes a shoulder arm that may be handier but is certainly less powerful than a full-power rifle, and the ubiquitous .223-caliber (5.56mm) guns such as the M-16/AR-15 or the AK-47 pattern firearms in 7.62x39mm (aka .30 Russian) are not properly general-purpose rifles. Their cartridges do not satisfy the general-purpose need for larger targets at extended ranges.

This is not to denigrate the carbine, okay? Many competent shooters feel the carbine does excel at its specialty (although Jeff Cooper riflemen might just smile quietly at that), and hey: since most carbines are also EBRs (Evil Black Rifles) which will send the disarmers into automatic conniption fits, everybody should own one if at all possible. But they are simply not adequate for reliable results at long distances on large targets, and a general-purpose rifle must be capable of that task.

Okay, so we've defined things somewhat vaguely, and this is on purpose: the goal is to define a rifle that can do whatever task a rifleman might be called upon to perform. The more we know about what will be required, the easier it is to start specializing, so it's best to keep things as vague as possible.

However, a little concreteness helps us to visualize, and in this case we can use two reasonably known quantities: 1) typical targets you might expect to engage, and 2) a working distance beyond which the rifleman cannot reliably hit his target, and thus will not ordinarily attempt shots.

In much of the US, animal targets would include small-game animals, deer of various sizes, feral hogs and the like, and on the upper end, elk, moose and bear. In extraordinary circumstances, other live targets such as cattle, horses, and other humans attacking you may end up on the list as well, and in that latter case you may also be called upon to disable vehicles supporting your attackers. Different parts of the country may present somewhat different concentrations of these--for example, here in Alaska, the ubiquitous moose may run well over a thousand pounds live weight. The point is that a general-purpose rifle may be called upon to put down a tiny target at short range, or a 700lb animal three football fields away. For the sake of discussion, we'll settle on an upper limit of 1,000 pounds for a live target, and say that a general purpose rifle must be capable of handling that upper limit--on occasion.

Likewise, there is the matter of the ability to hit at a distance. It is not easy to hit a twelve-inch target at 300 yards range--every time, from improvised field positions, under time pressure. In almost every case, the intrinsic accuracy of even an "ordinary" rifle is better than the ability of the shooter to place his shots, and somewhere between 200 and 400 yards is a practical outer limit for most of us. Jeff Cooper extolled the "sporting limit" of 300 yards, which he quoted from Townsend Whelen, and this seems like as good a working number as any. We train to be capable beyond that--somebody shooting at me from 400 yards away is by no means safe from return fire--but there is a limit to what we can call general-purpose.

The "sporting limit" works very well in this sense, as well: if I am taking a shot at an unwounded game animal to secure meat for the table, I will hold myself to rigid standards out of respect--to wit, I will not shoot beyond that distance at which I can no longer guarantee a quick and sure kill. I've got too much respect for game animals to risk making them suffer needlessly by wounding. On the other hand, if things have got so far out of hand that I actually have to take a shot at another human, then considerations of sportsmanship go right out the window, and my only concern is that my attacker is immediately disabled from further trying to hurt me. And so only in exceptional circumstances have I taken a shot past 300 yards on game animals--and even then I didn't feel entirely right about it (fortunately for my conscience, both of those instances were instant "lights-out" results)...but if another human presents an immediate threat at 500 yards distance (an extraordinary circumstance among extraordinary circumstances), all bets are off.

Very well then: for the purposes of subsequent installments, we'll consider a general-purpose rifle to be capable of handling the occasional 1,000 pound live target at a maximum "working" range of 300 yards, with smaller targets and closer ranges being the norm. Please keep in mind that quibbling about the numbers is not the point--the point is that we are talking about a diverse and demanding set of criteria to meet. And there is much to discuss there!

Posted by Kevin Wilmeth at 9:48 PM